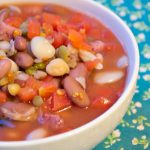 Yummy Crock-Pot 15 Bean and Ham Soup with tomatoes, garlic, and onion. This hearty recipe hits the spot and was inspired to use up some leftover ham.

The day before I made this super yummy recipe for Crock-Pot 15 Bean and Ham Soup I had cooked up a picnic ham in the crock-pot. Once we were done with the ham we were left with a huge ham bone with some yummy attached ham that can be sort of hard to get off. Instead of trying to pry that stubborn ham off the bone I decided to use it in a delicious soup.

I scrounged around in my pantry and found a package of 15 bean soup hiding behind a box of cereal or something. It was just begging me to turn it into some amazing soup.

15 bean soup is really just a mixture of beans. Usually containing the following beans: Northern, Pinto, Large Lima, Blackeye, Garbanzo, Baby Lima, Green Split, Kidney, Cranberry, Small White, Pink, Small Red, Yellow Split, Lentil, Navy, White Kidney, Black Bean. Some packages come with a seasoning packet while some are just the beans. You can usually find the bean mix in the section of your local grocery store where they sell other dried beans. Or, you can purchase some online at stores such as Amazon – HERE. 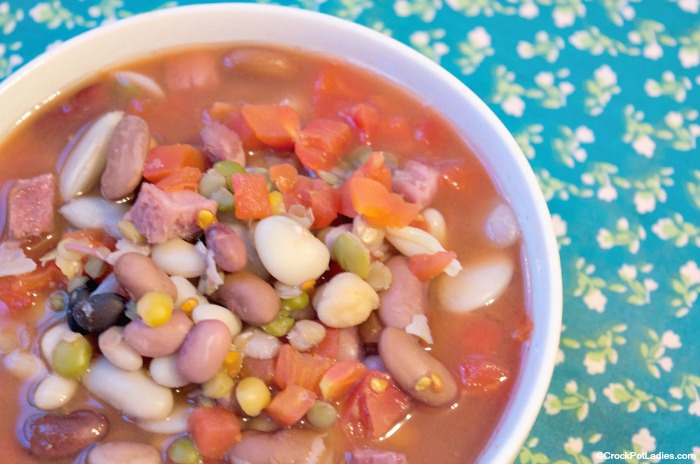 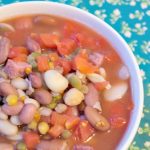 This recipe is perfect for using up a leftover ham bone. Just add beans and few other key ingredients and let it simmer away all day! Serve with a side of cornbread for a delicious meal.
Ingredients
Servings: people
Instructions
Recipe Notes

As your beans cook and absorb the water as it cooks, feel free to add more water. Keep in mind however that you should never fill your crock-pot more than 2/3 of the way full. This causes dishes to cook much slower than the recipe calls for.

We strongly recommend cooking this recipe on LOW and not converting it to a HIGH cooking time. The beans need plenty of times to absorb liquid and become tender.

Weight Watchers SmartPoints calculated based on 6 ounces of cooked ham for the entire recipe. We strongly suggest you weigh how much ham you get from your ham bone and calculate the recipe accordingly.

Products Used In This Crock-Pot 15 Bean and Ham Soup Recipe: