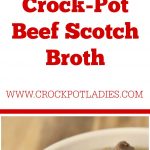 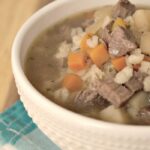 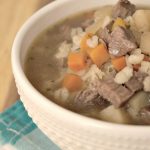 This traditional recipe for Crock-Pot Beef Scotch Broth is a tasty rich meaty beef soup filled with beef stew meat, carrots, potatoes and pearl barley. This frugal recipe is simple yet tasty and a common dish found in Scotland that has been adapted to the slow cooker!

This recipe is submitted to us by Julie Parrish. Julie says “I used to like this as a Campbell’s canned soup when I was a kid.  Of course, once you’re older and you learn how to cook, everything taste better from fresh.”

To be honest I had never heard of Beef Scotch Broth before Julie sent me this recipe. Either homemade or a canned version. But once I saw the recipe she sent me and I tried it out myself I was in LOVE!

Scotch broth is a traditional Scottish soup made with either lamb, mutton or beef, barley, and root vegetables such as potatoes and carrots.

This recipe uses beef because it is more widely available in the U.S. than lamb or mutton is. But feel free to use either of those meats if you have access to them.

I have now made this soup a few times with beef, lamb and even venison because here in Wyoming those are pretty common meats. Our family buys a lamb each year from friends who’s kids raise them for 4H projects. And while we are not a hunting family we have friends who often gift us with cuts of venison from time to time.

I hope you give this delicious recipe a try! It is a great hearty and filling soup that is perfect for any chilly Autumn or Winter day!

More Amazing Soups To Make In Your Slow Cooker! 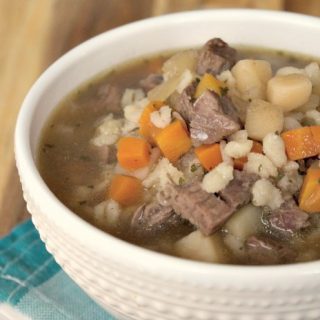 You can cut the onions either finely, or leave them in bigger chucks. I don’t prefer to eat the onions although I enjoy the flavor, so I leave mine chunked so I can easily pick them out.