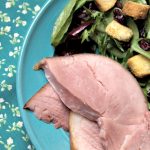 This recipe for ham done up in the slow cooker is an easy yet unique way of cooking your ham. Perfect for Easter, Christmas, Thanksgiving… or any time really!

This is a sweet ham recipe that allows the meat to cook slowly in a flavorful apple cider liquid that is spiced nicely with cinnamon, nutmeg and even a little vanilla extract. Not your normal ham recipe, but one worth giving a try!

As for the ham you select we like a nice bone-in ham as the bone adds additional flavor and moistness. Don’t get a smoked ham (also known as a Country Ham…popular in the south) though as the flavor is overpowering in this particular recipe.

Pick a nice ham that will fit in your slow cooker. We recommend a nice big 6 quart oval slow cooker as that will hold most larger hams.

The amount of servings will really depend on the size of ham, I left that open as it really doesn't matter what size you get as long as it fits your crock.

I only used about a half gallon of cider, it ended up being more cost effect to purchase the whole gallon, and I got a better quality brand that way.