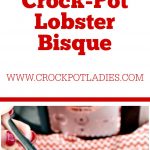 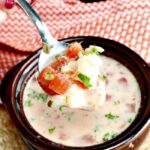 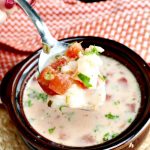 My husband and I have a running joke that whenever one of us asks “what do you want for dinner?” the other answers “Lobster!” and we laugh it off because we NEVER have lobster. It is usually out of our price range. But this Valentine’s Day I thought “why not” let’s go ahead and splurge a little and so I bought a couple of lobster tails and decided to do a nice Crock-Pot Lobster Bisque recipe.

I have had lobster bisque at our favorite “date night” restaurants and it is SO good. Seriously you just wish they would bring the entire pot out so you can eat it by the gallon. And so that is what I was trying to emulate here with this recipe.

And frankly while this is a soup that is going to impress. It is actually quite easy to make. You start with a base of tomatoes, shallots and other aromatics and let it simmer away. Then puree  then add the lobster tails and let them cook for just a short time, remove the lobster from the crock-pot and add your cream, chop up your lobster meat and add it back in. And that really is it. You can let the soup base simmer away all day while you are at work and then do the finishing up touches before serving.

What Is Old Bay Seasoning?

This recipe calls for Old Bay Seasoning. This is a popular spice mix used in seafood dishes and contains various spices and seasonings. You can purchase Old Bay Seasoning in many grocery stores however if you cannot find this key ingredient in your local stores, it is also sold on Amazon. 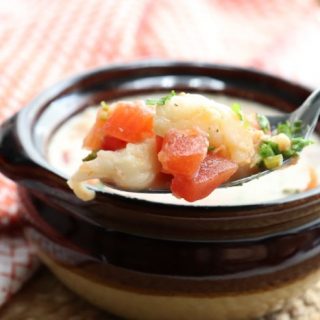 You may substitute half of a mild onion for the shallots if you cannot find shallots. You may also use less cream or substitute half and half for the cream for less fat.