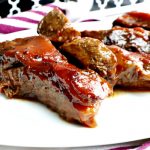 Just in time for summer barbecue season is this mouthwatering recipe for tender slow cooked Crock-Pot BBQ Boneless Beef Ribs. The ribs are cooked slow and low for ribs that are full of flavor and are so tender they almost fall apart when you eat them! 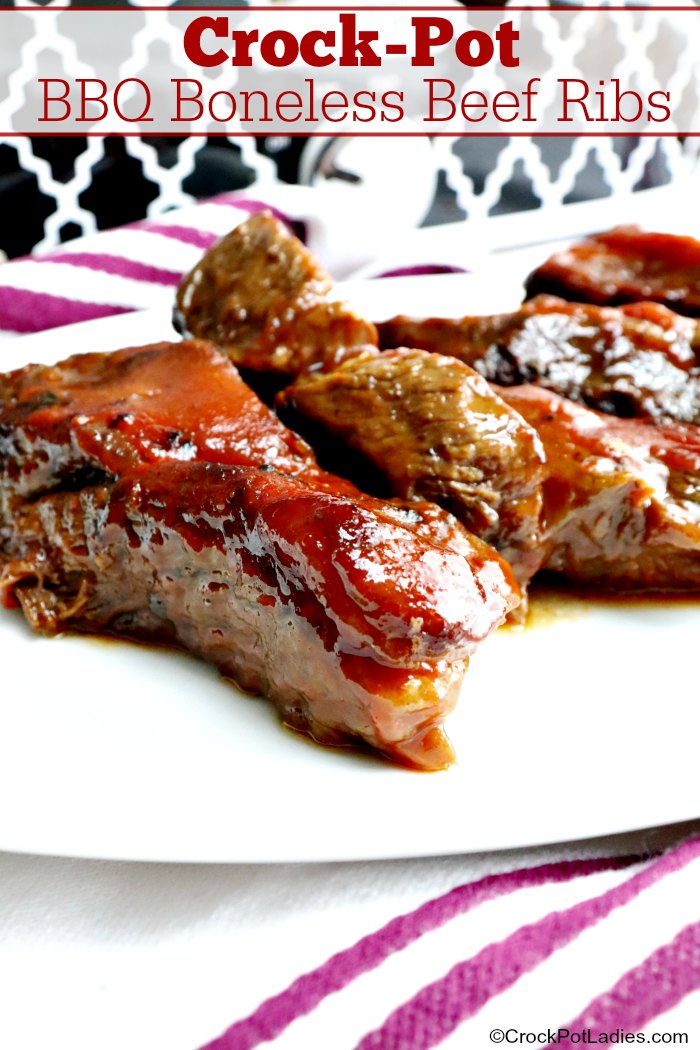 I have never cooked ribs in the crock-pot. In fact, let’s change that to…I have never cooked ribs…period. So this recipe for slow cooker boneless BBQ ribs was totally a first for me and one that I was really hoping would turn out as good at the ribs that my best friend cooks. You see she makes these to die for beef ribs but she cooks hers in the oven. And I really wanted to top her recipe.

And in the end, I managed a home run!

My neighbor was my guinea pig to try these tender ribs fresh out of the crock-pot. And after the first bite he said “I need more just to be sure” and then he proceeded to help himself to another big piece.

Silly me, I thought he was on the fence about the taste, but he said they were some of the best ribs he has ever had!

Later that night, he asked me to come in and help him with something in the kitchen. Being the kind neighbor that I am I of course said yes. There in his kitchen he had a slab of pork bone-in ribs and his crock-pot was out on the counter ready to go and he wanted me to work my crock-pot magic on his pork ribs. And so we made this recipe with bone-in pork ribs and I dare say those ribs came out as good if not better!

So needless to say this recipe is versatile. Use whatever kind of ribs you like or what’s on sale.

I started this recipe by broiling my ribs in the oven. I wanted a little “brown” on the tops of the ribs. This is totally not necessary and you can feel free to skip this step if you don’t want to heat the oven up. Additionally you could toss the ribs on the grill and grill them for just a few minutes on each side, again, just to give them a little browning.

Once you have broiled or grilled your ribs on both sides, or if you choose to skip this step, just add the ribs to the slow cooker. I layered the ribs in my 5-quart slow cooker but did not stuff them in there tightly. You will want just a little room to allow the BBQ sauce to flow to the bottom of the crock-pot while the meat is cooking.

Once the ribs are in the crock-pot, whip up a doctored barbecue sauce. Use whatever brand of store bought BBQ sauce you like. Really it is a matter of personal preference. I am partial to Sweet Baby Ray’s BBQ sauce myself. I think it is just the best barbecue sauce ever made!

Add the other ingredients to the BBQ sauce and put the lid on the slow cooker and cook on HIGH or 4 to 6 hours or 8 to 12 hours on LOW. The ribs will be done and tender either way you cook them but I feel like they come out more tender and “fall off the bone” (even though there are no bones!) when you cook them on LOW for the longer cooking time.

Even better, this is one of those recipes you can make in the morning and let them cook away all day long while you are at work.

Can I Use Beef Ribs With Bones Instead Of Boneless Ribs?

Yes, you can use bone-in beef ribs instead of boneless ribs in this recipe. If you decide to use ribs with bones you will want to make sure you use the right ribs.

Beef ribs are also known as beef back ribs and come from the cow’s rib section and are long. These are the ribs most associated with barbecued ribs. There are 13 ribs of each side of a cow from the breast to the backbone. With beef back ribs, the meat is between the bones.

Short ribs, on the other hand come from the short plate of the cow, right in front of the flank steak and right behind the brisket. With short ribs the meat is on-top of the bone.

The best ribs for this recipe if you are not going to use boneless beef ribs is to use beef back ribs or St. Louis style ribs.

Can Your Cook Frozen Ribs In A Crock-Pot?

Yes you can cook frozen ribs in the slow cooker. There is no need to thaw your ribs if they are frozen before you pop them into the slow cooker. However, you will need to cook your frozen beef or pork ribs for a little longer. In fact, this recipe for Crock-Pot BBQ Boneless Beef Ribs can be made into a slow cooker freezer meal. And you just need to cook the ribs for 9 to 13 hours on LOW or 5 to 7 hours on HIGH.

Can I Use Pork Ribs Instead Of Beef Ribs?

Pork ribs are a little easier to find in most major grocery stores in the U.S. and they also tend to be a little cheaper per pound. So if beef ribs are not easily found where you live or are just not in your budget you can indeed use pork ribs instead of beef ribs. In fact, you may find that pork ribs will come out more tender than their beef counterparts.

If you substitute pork ribs for beef ribs in this recipe you may want to reduce the cooking time by an hour or two so that your ribs do not overcook and become so tender that you end up with a slow cooker full of pulled pork and bones. 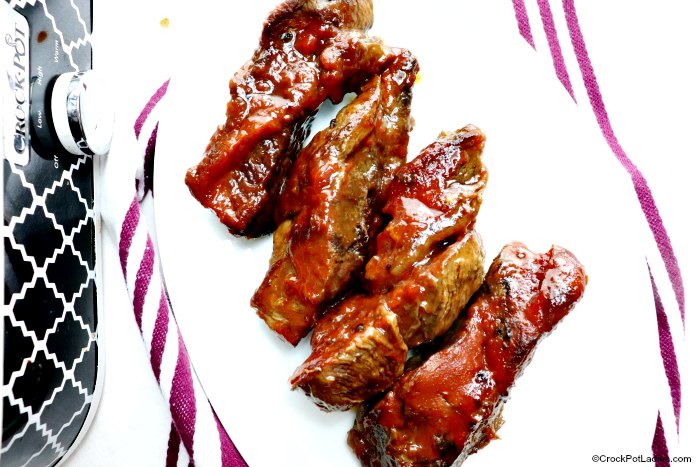 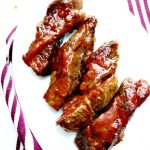 This quick and easy slow cooker recipe will have your mouth watering when you bite into these tender sweet and sticky ribs.
Ingredients
Servings: People
Instructions
Recipe Notes

Gluten Free Note - Look for brands of BBQ sauce, Worcestershire sauce and hot sauce that are gluten free. These are the ingredients listed that may contain hidden gluten. If you are on a GF diet it is always prudent to read the ingredients of any store bought ingredients.