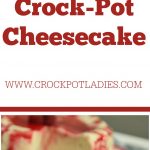 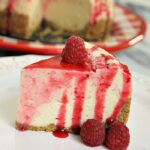 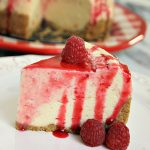 If you are looking for an amazing dessert recipe that you can make in your slow cooker this recipe for Crock-Pot Cheesecake is a winner every single time!

It is hard to believe that you can cook a cheesecake…a CHEESECAKE in your slow cooker but you sure can!

In this recipe I rummaged around in my kitchen cupboards for a heat safe bowl that would fit inside of my 6 quart oval crock-pot and found one. If you do not have a bowl already this 7 Cup Pyrex Glass Bowl should work in most slow cookers. You could also use a small springform pan that you have wrapped the bottom in aluminum foil before adding to the slow cooker.

Once the cheesecake is done cooking allow it to cool to room temperature and then chill it in the refrigerator for several hours. When you are ready to serve just carefully remove the cheesecake from the pan and eat as is or you can top with anything your heart desires.

In the photos for this recipe I used a raspberry sauce that I made (fresh raspberries and a little sugar cooked on a pan on the stove top until the berries were juicy. I smashed the berries while they cooked with a spoon. Strained off the pulp and seeds and let it cool) and of course a few fresh raspberries for garnish. 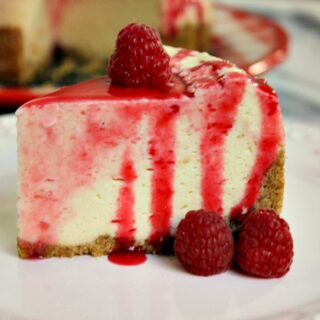 You wont believe how easy it is to make a delicious and creamy cheesecake right in your slow cooker. This basic slow cooker cheesecake recipe is wonderful any day you are craving some luscious cheesecake for dessert! Serve the cheesecake plain or top it with a fruit sauce to take it over the top!
3.64 from 14104 votes
Print Recipe Pin Recipe
Prep Time 30 mins
Cook Time 2 hrs
Total Time 2 hrs 30 mins
Course Desserts
Cuisine American
Servings 6 Servings
Calories 671 kcal

Linked up at Eat at Home Ingredient Spotlight