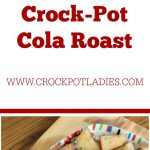 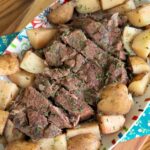 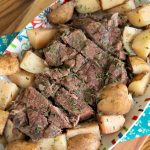 Cola acts as a fantastic meat tenderizer to your beef pot roast in this delicious & easy 5 ingredient recipe for Crock-Pot Cola Roast! A great easy dinner!

The addition of some cola soda (pop?) to a beef pot roast in the slow cooker is magical!

The cola tenderizes the meat while it cooks all day in the slow cooker and adds a lovely sweetness to the roast that is really nice.

The sweetness factor is not super sweet but it is there.

I used two cans of Coca-Cola but you can use whatever brand of cola soda you prefer such as Pepsi, RC Cola, even generic will work too.

My family really loves this pot roast recipe and how tender the beef comes out. I love that I can just do a little prep work in the morning (cut the onions and potatoes mostly) and toss everything in the slow cooker and let it cook away while I go about my day.

A lovely no fuss dinner! 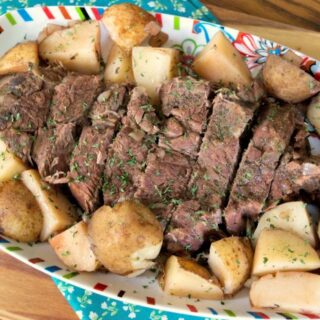 To make clean up easier you may wish to either line your slow cooker with a slow cooker liner or spray with non-stick cooking spray.