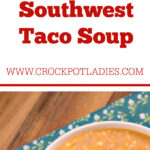 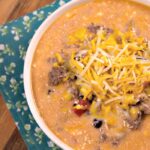 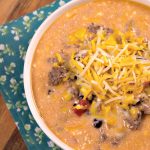 Crock-Pot Creamy Southwest Taco Soup was a recipe that came about because my family had been purchasing so much cream cheese I needed a way to start using it up quickly before it went bad.  That isn’t an uncommon reason for why I figure out a recipe, wanting to not waste extra food before it is unusable.  Gotta have a little bit of my grandparents in me, that tried to squeeze everything they could out of their food after living through the depression.

Since my family really enjoys taco soup and I make it quite a bit, I just adapted a recipe I had been using, to make it a smoother, creamy southwest version.

I had actually started making this version, a while back,  to use up some clearance tomato soup that someone had purchased and it’s flavor was just a bit strange for tomato soup, but worked just fine with a can of it added to a huge batch of taco soup and I just now always add a can of tomato soup.

I began adding cabbage to our taco soup because it’s an easy way to get my family to eat cabbage without them knowing it.  As long as I shred it well and thin it cooks down so small they don’t realize it, so if you think that is just too strange for a taco soup you can omit.

As with most soup recipes in the crock they are rather open,  If you have a favorite ingredient that your family loves, feel free to add it!  You really can’t mess this up.

Nutrition information is for the soup only and does not include additional toppings. Weight Watchers SmartPoints calculated using fat free cream cheese and fat free half and half (instead of heavy whipping cream).