Crock-Pot Barbecue BBQ Baby Back Ribs that are delicious, tender and falling off the bone yummy. slathered with sauce and have potatoes on the side.

We love doing Ribs in the Crock-Pot because they turn out so tender and easy to eat.  It’s nice to be able to eat ribs without being covered heat to toe with BBQ sauce.  Now normally when you put veggies, your supposed to put them at the bottom, but it doesn’t work so well with Ribs, so they end up on the top and I just cover them with BBQ sauce to give them moisture so they cook. 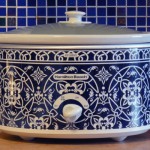 BBQ Baby Back Ribs with Onions and Potatoes. With the BBQ Sauce go as Spicy or Un-spicy as you like! The potatoes will have BBQ sauce on them for moisture but they really don't end up taking on the flavor.
Ingredients
Servings:
Instructions
Nutrition Information
Calories: 2879kcal, Total Fat: 182g, Saturated Fat: 64g, Polyunsaturated Fat: 0.1g, Monounsaturated Fat: 0.01g, Cholesterol: 800mg, Sodium: 3239mg, Potassium: 831mg, Carbohydrates: 77g, Dietary Fiber: 5g, Sugars: 40g, Protein: 217g, Vitamin C: 77%, Calcium: 46%, Iron: 51%
If you like this recipe or find it useful, it would be lovely if you would consider leaving a nice 4 or 5 star rating. Rating is done by clicking on the stars above.
Powered byWP Ultimate Recipe
Photo Credit
147shares