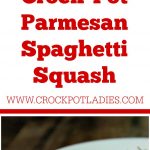 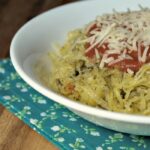 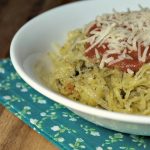 This recipe for Crock-Pot Parmesan Spaghetti Squash is an easy way to make spaghetti squash. Cooking a tough squash in the slow cooker is made simple!

I participate in the Bountiful Basket Program as a way to save money on produce for my family. In one of my baskets recently were two spaghetti squashes which I was so excited to see.

Being that I am trying to do both Weight Watchers and Low Carb spaghetti squash is a great way to enjoy a pasta-like dish and still stay on my WW plan and drop the carbs way down.

I have cooked spaghetti squash in my slow cooker before and so I knew how easy it was. And thus this recipe for Parmesan Spaghetti Squash was born!

Spaghetti squashes are pretty hard to cut in half when they are raw. So the best way to cook them is to cook them whole then cut them in half, scoop out the seeds, and shred the meat of the squash with a fork to create spaghetti-like strands.

To finish up this recipe, I took the squash strands and sauteed them in a skillet with some Parmesan cheese and basil pesto. Then warmed up some jarred marinara sauce (you can also use homemade marinara sauce) and served it on top of the spaghetti squash.

The results were delicious. Even my kids loved this recipe, my son had THREE helpings he loved it so much.

In my book this recipe was a hit. Finding a healthy recipe that I can have and stay with my diet goals yet still make my kids happy is a winner! 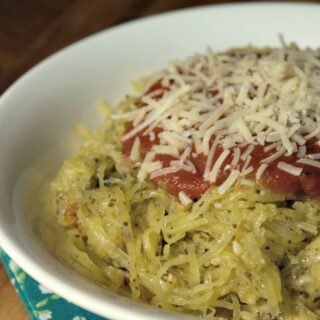