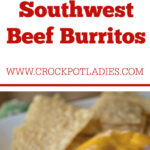 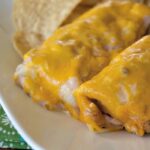 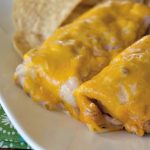 Crock-Pot Creamy Southwest Beef Burritos is a smooth, creamy tasty meal that my family really enjoyed.    You can make it one of two ways.  I made it cooking the beef and onions in the slow cooker first and then mixing up the burritos to cook in the crock.

You do this by placing the raw stewed beef or hamburger in the crock with the chopped onions.  Every hour or so you stir the beef up a bit to mix it around so that it will be thoroughly cooked.  You then tilt the crock at one end and if you have beef stew meat you can use a few paper towels to soak up the excess liquid.  If you have hamburger you will need to use a ladle and scoop it out.  I do this because it’s just very easy to dump and not have to stand over the stove.

The other way is to precook the beef and onions on the stove top and then assembling the burritos and placing them in the crock to cook.  I used beef stew meat, but you can also use chopped steak or even just hamburger.  With  hamburger you’ll want to drain the fat off before mixing the rest of that mixture.

You can make this as mild or hot as desired per taco seasoning and salsa.  For our family, we are cutting back on salt as we can, so we used a low sodium taco seasoning.

You will want to use at least a 6 quart crock or larger if you have one.  Any smaller and you will have more than the two layers.

To make clean up easier you may wish to either line your slow cooker with a slow cooker liner or spray with non-stick cooking spray. If using a 3.5 quart casserole slow cooker, you should be able to fit all 12 burritos in one single layer. So instead, add half of the soup mixture to the bottom of the slow cooker, place all of the burritos in a single layer, spoon the other half of the soup mixture on top and top with 2 cups of shredded cheese. Cook for 2 to 3 hours on LOW.