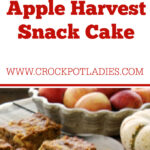 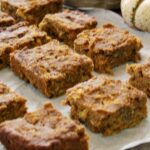 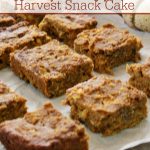 Eat a slice of this healthy and easy to make Crock-Pot Pumpkin Apple Harvest Snack Cake for a snack, dessert or even breakfast. Filled with pumpkin, spices, apples, and nuts (if you want them) this moist cake is delicious.

This lovely recipe was inspired when I spotted canned pumpkin on sale at the grocery store as it usually is this time of year right before Thanksgiving. At just $1.00 per can I could not resist picking up a few cans to have on hand for making all the yummy pumpkin things…pumpkin pie (of course), pumpkin muffins, pumpkin bread, pumpkin cookies and more.

I LOVE to bake, both in the traditional sense in my oven and in my slow cooker. So the other day I decided to set about making a healthy pumpkin based snack to serve my kids after school.

I was going to add some sweetened dried cranberries but my 14 year old son decided that an entire bag would make a great snack and he ate them all…I swear he is going to eat me out of house and home.  🙂

I decided that I would not add any added fat or oil to the cake and instead rely on the moistness from the canned pumpkin. I was worried it might come out dry, but here is the great thing about baking in your slow cooker…it is a moist cooking environment so it is pretty hard to get a dry cake. In fact you run into the opposite problem in that things can be too moist and wet. So no added fat and keep the liquids to a minimum is where I went with this recipe.

I only used a single large mixing bowl, a silicone spatula and my set of measuring cups and spoons because I didn’t want to make a ton of dishes for me to clean up later.

I whipped up a basic pumpkin batter and then folded in some chopped apples (I didn’t even bother peeling them), some toasted pecans (you can use walnuts or leave them off all together), and then spread the batter in my slow cooker.

To prevent the water that condenses on the lid of the slow cooker from dripping on my cake I placed a layer of paper towels between the lid and the crock. Turned the crock onto HIGH and set the timer for 3 hours.

I went about my day and then checked the cake to see how it was.

I poked it with a BBQ skewer because I couldn’t find the toothpicks…the kids had been playing a math game with them the day before…and it wasn’t quite done. So I let it cook for another 30 minutes and it was perfect.

I let it cool completely (although I was greatly tempted to take a slice while it was warm because it smelled SO good) and when the kids came home we all enjoyed a slice.

It was a big hit and the kids had no idea that it was a rather healthy for them snack.  😉

This cake is not big and fluffy…it is more dense and hearty. If I had to describe the texture it would be that of something between a pumpkin bread and a pumpkin cookie. And moist…the apples, pumpkin and honey all lend to a nice moist cake.

And between you and I, the cake tastes even better at 4:00 AM before the kids are up with a cup of coffee. 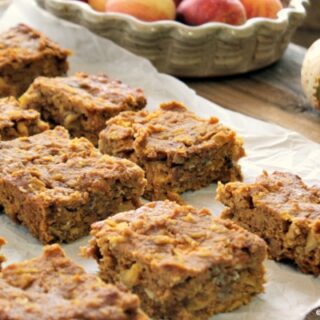