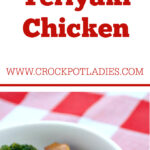 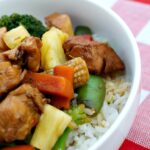 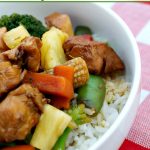 Whip up some healthy Crock-Pot Teriyaki Chicken with this simple recipe. Serve over steamed rice or noodles & enjoy this yummy entrée any night of the week! Plus it is Weight Watchers friendly too!

I tried it her way and to be honest it was just “okay” and sort of bland.

So I decided to play with the recipe a little bit and came up with something that tastes better.

I am not going to pull your leg on this one though…cooking a teriyaki chicken stir fry is much easier and quicker on the stove-top in a skillet and you’re not going to get any better flavor cooking it in the slow cooker.

I may just be shooting myself in the foot with this recipe because this is after all a slow cooker recipe blog. But I think honesty is the best policy. And my honest opinion is that some recipes are better NOT cooked in the slow cooker.

That being said…if you are a die hard slow cooker user or maybe you don’t have a stove-top to cook on (I know we have several readers who don’t…they are traveling in RV’s or trucks, they are remodeling their kitchens or their stove just went up and broke on them) and you have a hankering for some teriyaki chicken then go ahead and give this recipe a try.

My kids liked it and ate it and even had seconds so it is actually pretty good! The key is that I used a bottle of Kikkoman Teriyaki Baste and Glaze, canned pineapple (the liquid from the can while cooking, the chucks of pineapple added near the end) and some ginger, garlic and brown sugar to add a lot more flavor. YUM 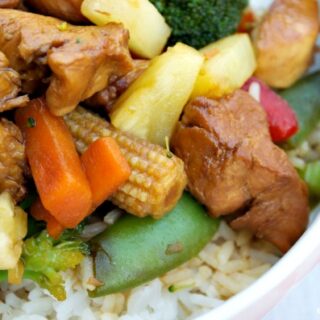 Heidi Kennedy
Boneless skinless chicken breasts (you could use thighs too if you want) are simmered in the slow cooker with a yummy Asian teriyaki sauce and pineapple juice. Steamed Asian vegetables are added near the end and then you can opt to serve this dish over white or brown rice or noodles.
4.25 from 16 votes
Print Recipe Pin Recipe
Prep Time 10 mins
Cook Time 2 hrs
Total Time 2 hrs 10 mins
Course Entrée
Cuisine Asian
Servings 8 Servings
Calories 245 kcal

We served this over steamed jasmine rice, however any white or brown rice or even noodles would be good too. To make this recipe gluten-free be sure to use a gluten-free teriyaki sauce such as those made by San-J.

Linked up at Eat at Home.