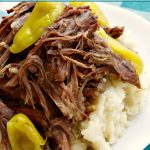 Simple ingredients for a simple recipe to make a low carb roast that is moist, tender and rich tasting with this recipe for Crock-Pot Mississippi Roast. You can adjust the spiciness by removing all or as many of the pepperoncini peppers as you wish! 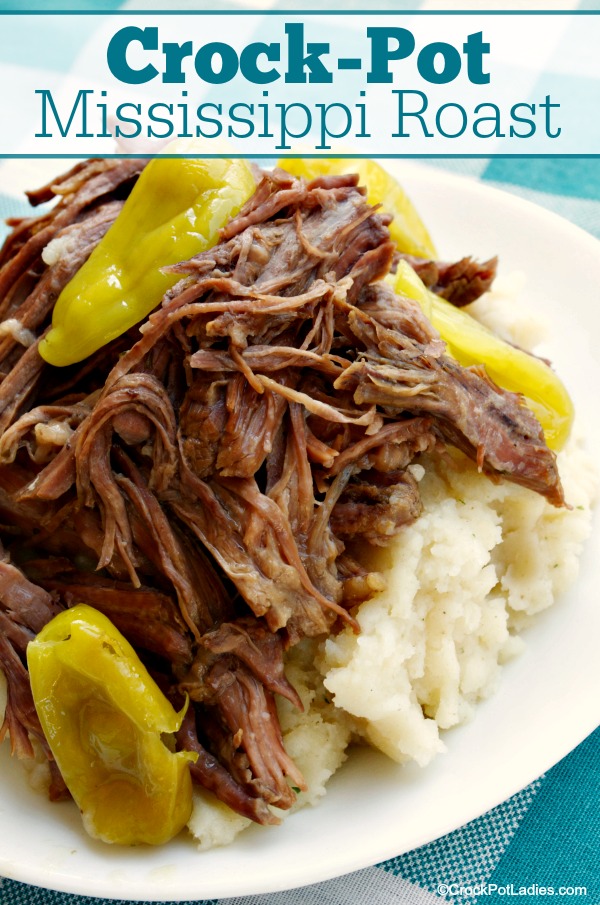 Crock-Pot Mississippi Roast is a simple way to make a marvelously moist and tender roast in your slow cooker. I have used this recipe on several different chuck roasts and have found even roasts that are a cheaper cut that tend to get a little bit dry when cooked come out moist and flavorful with this recipe.

That is great news for our food budget!

This is a low carb recipe (with just 8 carbs per serving), unless you serve it over mashed potatoes. But you can always swap the mashed potatoes for mashed cauliflower instead and it will still be fabulous!

And if you are wondering if you have to use allll that butter, you definitely can use less butter. If your chuck roast has a lot of fat marbling to it, I would actually suggest using only about half of the butter. The fat from the marbling makes the butter not as necessary, whereas if you have a leaner cut of roast, the butter is very helpful in creating a moist and tender roast.

While we try and avoid pre-cooking meat on the stove top as much as possible (except for ground meat which almost always needs to be pre-cooked) this recipe does call for browning the roast for just a few minutes. Browning the meat in a little oil seals in the juices in the meat and gives it a nice dark brown coloring as well as adding just a little bit of umami flavor to your dish.

You CAN however skip the browning step if you want to. So..if you are in a hurry or you just don’t care about the darker coloring…go ahead and skip that step. I promise it will still taste as good. BUT if you have the couple of minutes to spare I suggest you brown the roast so you get the full flavor profile.

In this recipe there are a couple of special ingredients that I used. I live in a smallish town in Kansas and don’t really have access to any sort of specialty food stores so you shouldn’t have much of a problem finding them in your stores either…but just in case I have offered links to where you can buy online.

The first is that I used a jar of Au Jus Gravy. This was found in the canned/jarred gravy aisle at my grocery store. If you cannot find it a can or jar of just plain brown gravy will work. Or you can mix up a packet of brown gravy mix by following the directions on the packet.

The other “special” ingredient is a jar of pepperoncini peppers. These are found in the pickle and olive section of most grocery stores. You will want to look for a jar of whole peppers and not sliced peppers. That way it is easy to pull out the peppers after the roast has cooked for less heat. If you like your roast a little more spicy then you can just break up the peppers when you shred the meat. As much or as little as you like. The pepperoncini peppers are considered a mild pickled pepper but if you are serving this roast to the kids it may be a good idea to pull them out and serve the peppers on the side for anyone who wants added spice. 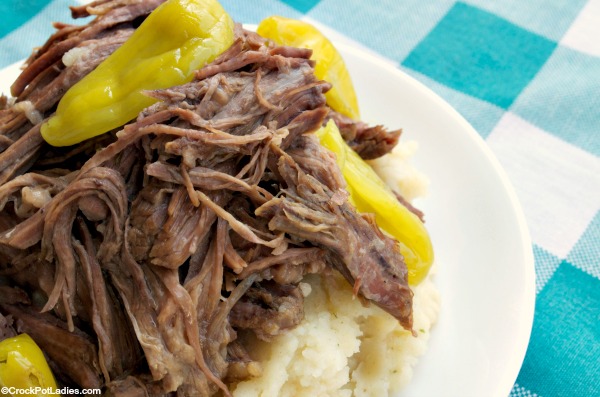 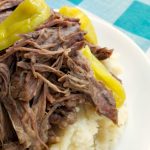