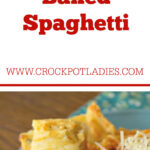 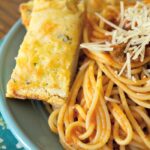 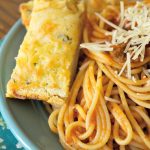 Ground beef is simmered away with your favorite store bought marinara sauce along with some additional seasonings and then add in pasta that has been cooked just until al dente along with some mozzarella and cream cheese and let it cook just a little bit more for an amazing Crock-Pot Baked Spaghetti recipe everyone in the family will adore!

My good friend asked a good question the other day “can I cook spaghetti in the slow cooker?“And my answer was “hmmmm.  I don’t know“.

Rethinking this process, I decided to cook my sauce in the slow cooker and then add in some noodles that were cooked, but not all the way (al dente).

In cooking, al dente describes pasta and vegetables, rice, or beans that are cooked to be firm to the bite. The etymology is Italian “to the tooth”. In contemporary Italian cooking, the term identifies the ideal consistency for pasta and involves a brief cooking time. Molto al dente is the culinary term for slightly under-cooked pasta. Under-cooking pasta is used in the first round of cooking when a pasta dish is going to be cooked twice. The culinary term “al forno” is used for pasta dishes that are cooked twice. Pasta that is cooked al dente has a lower glycemic index than pasta that is cooked soft. When cooking commercial pasta, the al dente phase occurs right after the white of the pasta center disappears.

I added my sauce in the slow cooker (along with some ground beef and spices), let it get hot and then added in my noodles.  If you want to add in some chopped veggies, now would be the time to do this. Chopped green peppers, onions or mushrooms would be great in this dish. On top of the noodles (friend suggested this, different then the first friend), I added in small chunks of cream cheese. and let that cook.   I gave it a quick stir and added in some mozzarella cheese (melted cheese is always good on spaghetti).

A couple hours total and after cooking some garlic cheese bread, I had dinner.

One final note: you can keep the baked spaghetti in the slow cooker after it is done cooking, turn the temperature down to WARM. The noodles will keep cooking. And if you leave it in there for over an hour on WARM, your noodles will start to get mushy. I would suggest taking the baked spaghetti out of the crock-pot and serving from a serving dish.

No one likes mushy noodles! 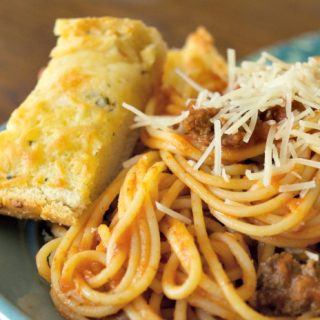